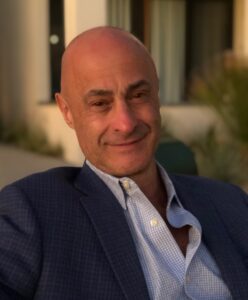 Ron began his career in the real estate business in 1983 and a professional agent working on the North Shore of Long Island, New York. Possessing little knowledge about real estate and freshly receiving his real estate license, Ron jumped into the residential apartment and housing rentals. Although Ron did very well in the rental arena, he always had his sights set on being a top residential sales specialist.

Primarily self-taught, Ron advanced his career as a top residential listing and sales agent in the upscale area of Northport, New York, one of the premier North Shore water towns in Suffolk County.
After working and succeeding at a very young age as a real estate professional, Ron received the opportunity to join a major local bank in the New York metropolitan area as a loan officer. The manager that recruited Ron knew of his sales expertise as an agent and was confident that his sales skills would transfer over to the mortgage business.

As the manager had correctly speculated, Ron’s sales ability and skills allowed him to quickly succeed at a very high level as a professional mortgage loan officer.

As Ron’s successful journey in the sales mastery of mortgage loans progressed, all the while he kept his real estate practice going.  Eventually it came a time where Ron needed to make a decision as to which business he was going to commit to as a career.  Ron decided to give the mortgage business his complete focus and his success and income skyrocketed even higher.  As Ron continued to study and hone his sales and marketing skills his income continued to grow and grow.

After having been a loan officer for a number of years as well as being promoted to office and sales manager, In 1994 Ron decided to go out on his own and open up his own mortgage company within the New York City limits.  Ron specialized in low to moderate income lending.  At the time very few lenders were providing financing to borrowers that had less than a 20% down payment.  Ron carved his niche in being one of the few mortgage brokers in the nation that specialized in offering loans with down payments as little as 3%. Ron’s accomplishments in this area of lending were so high, that he was asked by an executive board member of the New York Association of Mortgage Brokers to personally meet and speak with Rick Lazio, whom at the time was a Congressional Representative for the State of New York, to discuss his success with low down payment loans and how they were positively impacting the minority community in which Ron was serving.

In 1995 Ron was approached by a competing area mortgage company and asked to speak to their loan origination staff about how to succeed as a loan officer.  Having never conducted a formal training program in his life, Ron created his first success presentation. The program was a huge hit with the group and that was the catalyst for Ron to begin transforming his career from mortgage company owner to professional trainer, speaker and coach. Ron started being requested to speak at more and more lending institutions and his passion for speaking and training continued to grow all the while he kept his mortgage company operating.

Realizing that there were virtually no success training programs for loan officers, Ron created and founded The New York Mortgage Institute In 1997.  His sole focus was to teach loan officers how to succeed at the highest possible level.  The programs presented covered mortgage 101 all the way up to advanced marketing and sales strategies.  Since at the time, there were only a handful of companies in the entire country that were offering loan officer training, Ron quickly became one of the most sought after mortgage trainers in the nation spending over 150 days on the road per year presenting his success programs.

Today Ron works exclusively in his private coaching program with a select number of top sales professionals from some of the nation’s largest real estate franchises, mortgage bankers, and national banks.  Unlike most other coaching programs in which you work with lower level coaches, Ron conducts all of the coaching himself as he does not believe in a one size fits all coaching platform.

You can find out more about which cookies we are using or switch them off in settings.

This website uses cookies so that we can provide you with the best user experience possible. Cookie information is stored in your browser and performs functions such as recognising you when you return to our website and helping our team to understand which sections of the website you find most interesting and useful.

Strictly Necessary Cookie should be enabled at all times so that we can save your preferences for cookie settings.

If you disable this cookie, we will not be able to save your preferences. This means that every time you visit this website you will need to enable or disable cookies again.